The history of Royal Jewelry Museum This building was the former palace owned by Princess Fatma El Zahraa, the granddaughter of the brother of Khedive Ismail and one of the descendants of Mohamed Ali Pasha. It was built in 1919 at 27 Ahmed Yahya Basha Street – Zezenia – Alexandria Governorate.

The palace is turned to be a museum in 1986. It is divided into ten halls displaying more than 11 thousand precious objects like gifts, pieces of jewelry owned by the royal family.

The design of this building The design of the building merges between the European and Islamic styles. Also, it distinguishes by the oil paintings, gilded and hand-painted ceilings, and glass panels drawn with scenes of Greek mythology that decorate many rooms of the palace. 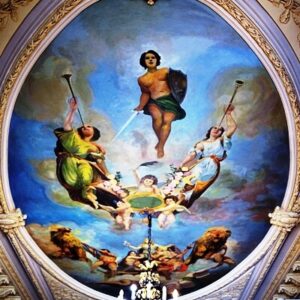 The collection of the museum The museum displays possessions owned by members of family of Muhammad Ali Pasha.

The masterpieces in the museum

A collar of Mohamed Ali Pasha

The golden chess of King Farouk

Dazzling pieces of jewelry were designed and made especially by the greatest designers in Europe for the queens and princesses of family of Muhammad Ali Pasha.

A tiara of Princess Shivakiar

The crown of Queen Farida

Mohamed Ali family built a lot of palaces in Egypt:

The Nubian Museum in Aswan

The Coptic Museum in Coptic Cairo

The Coptic Museum contains the largest collection of Coptic collections in the whole world. It is located in the Coptic Cairo inside the Babylon Fortress and beside the hanging church, the Cave Church, and Ben Ezra Synagogue. The history of The Museum This museum was opened to the public in 1910 by the efforts of […]

Among the events of the Ministry of Tourism and Antiquities for opening new museums in Egypt, the Ministry opened three museums in one day, on October 31, 2020. These museums are The Royal Carriages Museum, Kafr El-Sheikh Museum, and Sharm El Sheikh Museum. The Royal Carriages Museum is located in Boulaq. This museum is one […]

The Luxor Museum is located on the east bank of the Nile River on the Nile Corniche between Luxor Temple and Karnak Complex in Luxor City, and facing the Ramesseum on the west bank . The museum is constructed to display the wealth of rare and valuable antiquities discovered in Luxor and opened to the […]

Sharm El Sheikh and its Museum

Lately, the Ministry of Tourism and Antiquities is caring in opening museums in coastal cities as Sharm El Sheikh Museum and Hurghada Museum for more entertainment for tourists and adding cultural value for this city besides the beach tourism. In Sharm El Sheikh, you can enjoy doing several activities as soak up the sun on […]

National Museum of Egyptian Civilization will be the narrator for the achievements of the Egyptian civilization throughout human history, It will be the final home for the Egyptian royal mummies. The idea of building this museum was a part of the UNESCO project in Egypt after the saving of the Nubian monuments, but the establishment […]

The Museum of Islamic Art of MIA is the largest Islamic Art Museum in the world, as it houses close to a hundred thousand antique Islamic artifacts of various types collected from India, Iran, all the way to the Arabian Peninsula, the Levant, Egypt, North Africa, and Andalusia. This collection is characterized by its breadth […]

The Egyptian Museum in Tahrir Square

This museum is the most famous landmark in Egypt, holding great and unique ancient Egyptian collections. Let’s go back a little bit before building the Egyptian Museum Due to the discoveries of Napoleon Bonaparte’s expedition, Egypt built the Cairo Museum to conserve the objects. This museum was an initial house at Ezbakiyya. Unfortunately, in 1855, […]

Gayer Anderson Museum or Bayt Al-Kritliyya is one of the most perfect examples of Islamic domestic architecture in Islamic Cairo, It is located beside Ibn Tulun Mosque. This museum consists of two houses. The first house is on the east. It was founded by Hajj Mohammad Al-Gazzar in 1632. Later, this house was bought by […]

The GEM – The Fourth Pyramid in Giza Plateau

Only a few steps away from the pyramids, the grandchildren come to repeat the glory of their grandfathers by building a new destination, the Grand Egyptian Museum (the GEM), linking between the past and the present. The Grand Egyptian Museum is established on approximately 500,000 square meters. It takes a conical shape. This design was […]

Memphis and its Museum- Historical Site

Memphis is the first capital for united Egypt, It is considered a world heritage site by UNESCO in 1979. It lies on the west bank of the Nile River. The history of this great city: According to the Greek historian Herodotus, Memphis city was established by King Menes, the first king of untied Egypt, to […]

Hurghada and its New Museum

Now you will be to get a different experience in Hurghada city. Enjoy this article about Hurghada and its New Museum provided by Egypt Vacation Tours team to know about this unique experience. Hurghada is considered one of the most famous beach resort town in Egypt. It stretches some 40 km along the Red Sea […]

Abdeen Palace Museum is one of the most sumptuous palaces in Egypt. It was the seat of the ruler. It dates back to Muhammad Ali Pasha’s family. Khedive Ismail established Abdeen Palace in 1863 on an area of 25 feddans and used it as the headquarters of the ruling instead of the Citadel of Saladin. […]